President Muhammadu Buhari on Tuesday presented the budget for the 2020 fiscal year to the joint session of the National Assembly.

The budget is based on an oil price benchmark of US$57 per barrel, a daily oil production estimate of 2.18 mbpd. and an exchange rate of N305 per US Dollar.

Along with the budget proposal, a Finance Bill was presented to the National Assembly for consideration and passage into law.  The draft Finance Bill proposes an increase of the VAT rate from 5% to 7.5%. The 2020 budget revenues estimates is based, in part, on the new proposed VAT rate.

The sum of N8.155 trillion is estimated as the total Federal Government revenue in 2020 and comprises oil revenues of N2.64 trillion, non-oil tax revenues of N1.81 trillion and other revenues of N3.7 trillion.

The sum of N556.7 billion is provided for Statutory Transfers in the 2020 Budget and includes:

The non-debt recurrent expenditure includes N3.6 trillion for personnel and pension costs, an increase of N620.28 billion over 2019. This increase reflects the new minimum wage as well as our proposals to improve remuneration and welfare of our Police and Armed Forces. You will all agree that Good Governance, Inclusive Growth and Collective Prosperity can only be sustained in an environment of peace and security. 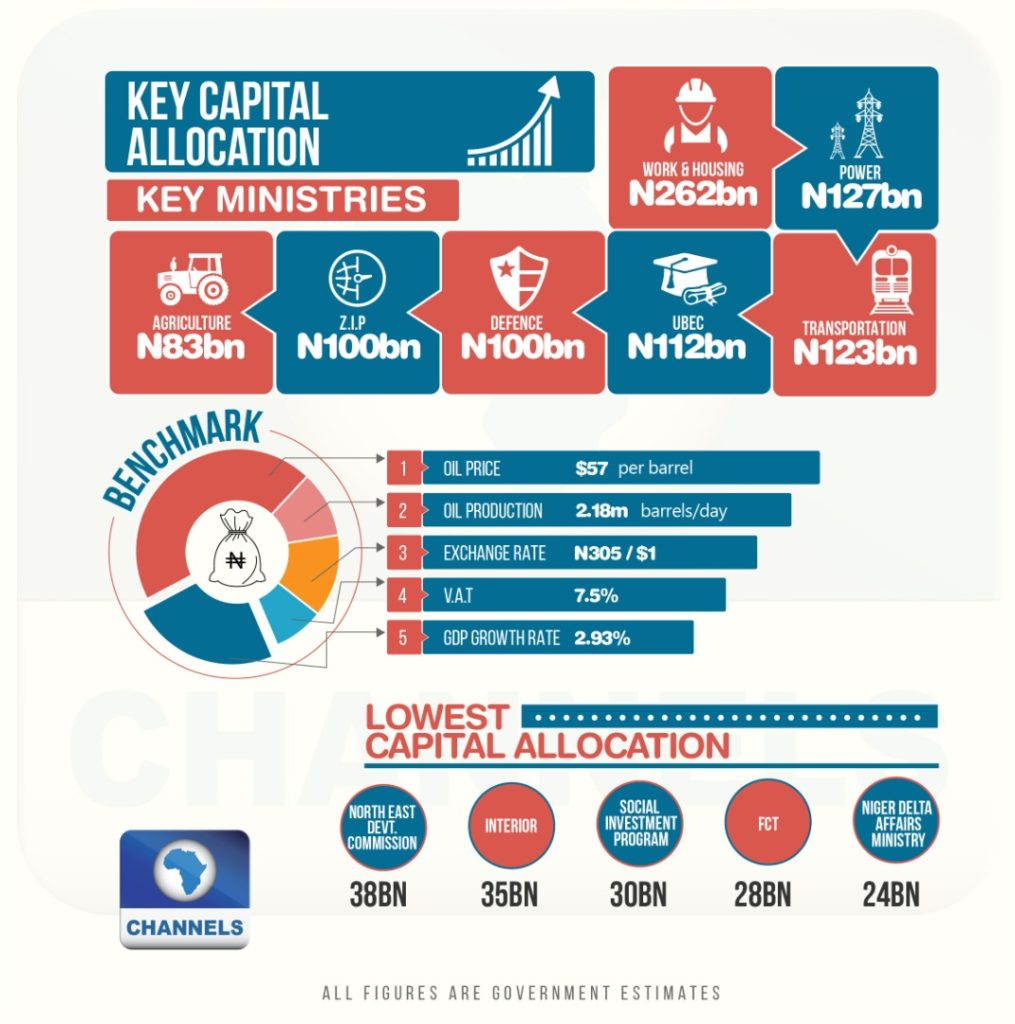 An aggregate sum of N2.46 trillion (inclusive of N318.06 billion in statutory transfers) is proposed for capital projects in 2020.

At 24 percent of aggregate projected expenditure, the 2020 provision falls significantly short of the 30 percent target in the Economic Recovery and Growth Plan (ERGP) 2017-2020.

Some of the key capital spending allocations in the 2020 Budget include:

The Budget deficit is projected to be N2.18 trillion in 2020. This includes drawdowns on project-tied loans and the related capital expenditure.

This represents 1.52 percent of estimated GDP, well below the 3 percent threshold set by the Fiscal Responsibility Act of 2007, and in line with the ERGP target of 1.96 percent.